I am in the initial stages of a project to look at economy of scale, utility bench-markings, asset management and impacts of economic disruption on utility systems. I should note that I am looking for volunteers, so let me know. But an initial question is whether economy of scale still applies. We think it should but given the disparities across the US, does it. As a quick survey, I enlisted several volunteer utilities to provide me with some basic information that I sued to create some ratios. And then we discussed them. The baselines were accounts and cost per millions of gallons produced.  The graphics are shown below. Economy –of-scale is alive and well. That means if you have a small utility, you cannot expect to have the same costs/gallon, or the same rates, as your larger neighbors. If you do, you are probably shoring your maintenance or capital programs. That leads to bigger costs later. Instead of comparing yourself to your larger neighbors, see what happens when you compare yourself to cable and cellphones in your area. You may be surprised. 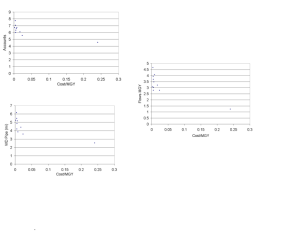