But connecting the pipe from the wastewater plant to the water plant, the process of reusing treated wastewater as drinking water without an environmental buffer, is relatively rare. There are two facilities in Texas that do this.  Wichita Falls Texas did it for a  period of time after their reservoir dropped below 2% of capacity, but they is filled a little after rainfall in September 2015, they took the system off-line.  The Colorado River Municipal Water District (CRMWD) has not.

CRMWD serves a total of 250,000 consumers in Odessa, Big Spring, Snyder, and Midland during the region’s worst drought in decades.  Back in 2002, they were looking for new water supplies in our area.  There was no place for surface reservoirs and most of the fresh ground water had already been developed (and as I blogged before – most of that is unsustainable groundwater withdrawals).  The high evapotranspiration limited IPR options.  Figure 1 shows how much that differential actually is:

So by May 2013 the CRMWD had completed 2 MGD, $14 million DPR plant to convert wastewater to drinking water standards.  The process uses microfiltration, reverse osmosis (RO), and ultraviolet disinfection (UV), which is basically the same as the IPR project I was involved with.  The DPR water is mixed with raw water from the nearby reservoir.  DPR makes up 20% of the total.  The raw and DPR water are then treated again using conventional drinking water treatment techniques. 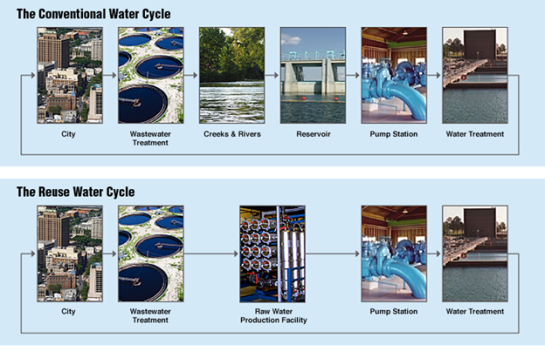 The technology is clearly available.  That leaves monitoring and public perception as keys.  Monitoring requires surrogates and redundancy – the multiple barrier approach.  Technology will create more monitoring tools, but what we need to monitor is somewhat understood.  CRMWD does this by going through a water plant after the wastewater plant – something that is likely going to be to procedure going forward as the processes are fundamentally different and remove different constituents.

Public perception is more of a challenge.  Overcoming the “yuck” factor took some ongoing customer interaction for CRMWD, but in west Texas, the need for water, and the limited availability of same, overwhelmed the perception, a situation that may not exist in most areas, but which will increase with time.  So the reality is that DPR is likely to received more interest, and less pushback in those dry, western areas with high population growth and limited supplies, as opposed to wet areas that appear to have more water, like Florida.  But expect to see more application of IPR and DPR.  Or maybe we should call both – potable reuse (PR)?