I spent a day in early October in doing a drive that I enjoyed as a teenager, later as a 21 year old and a 30 year old.  But has been a few years since I drove the dams of the AuSable River in the upper lower peninsula of Michigan.  The AuSable is a famous river, – starting out as the eastern boundary of the land Between Waters” as the native Americans called it before the loggers showed up.  The upper reaches of the river, 8 miles east of the turn east, was a cedar laden river – cold, hidden from the sun due to dense vegetation and full of a funny little fish called the grayling.  The AuSable was one of the few streams in the lower 48 states where grayling could be caught.  And caught they could – so many that anglers drove up from Detroit and Chicago to fish for the plentiful fish that was easy to catch.  Ice houses in Chicago bought the fish and sold them commercially.  However, logging on the river damaged the streambed, and access to the stream necessitated removing some of the cover.  In a short time the forces caused the demise of the little fish, but not the town of Grayling it left behind.  Around the turn of the century, brook trout were introduced to the river to maintain its reputation with anglers.  The brook trout bred, and the AuSable because world famous as a trout stream.  Alas, the brook trout were probably the death Nel to the grayling as they would eat the grayling fry.

The dams started in 1916 as a means to supply power to the northern peninsula and communities downstream.  A total of six dams were installed between 1916 and 1924:  Mio, Alcona, Loud, Five Channels, Cooke, and Foote. The latter were named to the financier and visionary for the dam construction.  The dams remain in use today as hydropower on the river.  They remain much as I remember – each brick and concrete structures built in another time.  The pride of workmanship and engineering from 100 years ago is clearly present throughout.  The look sturdy, just as they did 100years ago when the lights first flickered on.

The dams share the river with canoeists who often do the run from Grayling to its outlet at Lake Huron, navigating around each dam.  The trip takes a couple days.  My Dad and three buddies did it after he received a wooden canoe (from LL Bean) from his parents for graduation.  Two of his buddies were Ted and Jay Stephan, who lived on the river 8 miles east of town, and who would go on to be part of the Great AuSable Canoe Marathon, what is today one of the three great canoe races in North American. Jay won this race multiple times and is a legend in Grayling (as is Ted). You have to navigate the dams to win.  I am guessing being able to navigate them at night helps.

The canoe race negatively impacts the trout however because the river needed to be clearer to improve the race.  Canoeing became a major stream for canoeing – it is a huge industry for Grayling.  Today the main branch is more open and a few rainbow and brown trout inhabit the former grayling waters.  The fish decline started in the 1940s.  Trout Unlimited was created in Grayling as an organization to protect the trout.  The organization is international today, but old friends Jay and Ted were original members.

So finishing the river run (by car), I stayed overnight in Grayling.  Up on the ceiling of the restaurant/bar I ate dinner in was Jay and Ted’s canoe that they used to win the race multiple times in hanging from a ceiling in a bar, dated 1952.  It looks exactly like the canoe my Dad lost in a forest fire in 1990, which I remember him using to ride the river to fish when I was a little kid. 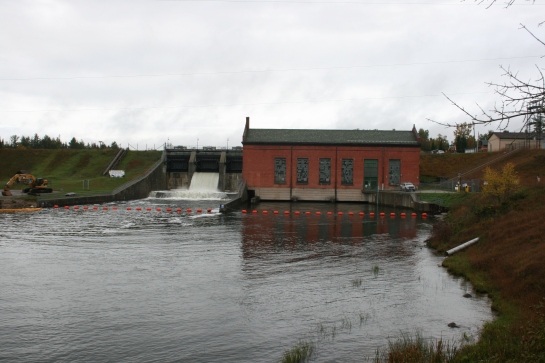 Jay and Ted’s canoe in Spike’s Bar in Grayling